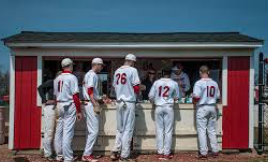 As the refreshment line moved, the ballplayers jostled and razzed each other.  One kid, dodging from a rib poke from a teammate, said, “Hey man!  God says you gotta be nice to me!”

His buddy retorted, “Hey, man!  There ain’t no God to save you from me!”

“Don’t you believe in God?”

“If God is real, why doesn’t he just tell me?” was his answer.

Nannygranne, overhearing this, offered cookies and Gatorade to the boys. Then, she smiled and said, “Well, weren’t you listening?  He did tell us.”

Both boys froze and studied her.  “Listening to what?” one asked.

She responded, “If you got room for an old lady at your table, I’ll tell you what I heard.”  Looking around as if checking for spies, she whispered, “And there might even be more cookies on my plate than I can eat.”

The boys grinned and offered high fives. “You got it.  We’ll save you a place.”

After the last ballplayer was served, Nannygranne piled a small plate with an assortment of cookies and grabbed a bottle of water.  She spotted her new friends waving from their picnic table and made her way over.

“Thanks for the cookies, ma’am,” one said.  “My name’s Nate.  This is Dewayne, and those two bone-brains are Bart and Leon, short for Bartholomew and Napoleon. But they don’t understand big words, so go easy on ’em.”

“Hey, guys.  Glad to meet you.  All the kids call me Nannygranne.  I don’t know any big words, so don’t worry.”  Laughing, she passed the plate to Leon. “And you can have the cookies for free.”

Everybody grabbed some cookies and left one for Nannygranne.  She grabbed it dramatically, saying, “Whew!  That worked out just right!”  Then, laughing, she took a bite.

Bart spoke up, “So, Nate says God told you he was real.  Is that true, Ms. Nannygranne?”

“Every word of it.  But you have to know how to listen.” She took another bite of her cookie.

“Oh, you mean like that ‘still small voice’ our preacher talks about?” Leon asked.

“Well, what I heard was bigger than that,” she began.  “I heard the universe say nobody’s figured out what caused the Big Bang.  But God said He made the universe.  I heard an unborn baby say nobody knows how two different people can make a baby with its own DNA.  But God said He knits us together in our mother’s womb.  I heard a Sociology professor say nobody knows why all cultures and peoples the world over have a common sense of right and wrong. God says He makes each of us in His image and His likeness.  He told me all that in the Bible and showed me the world through scientific eyes.”

The boys were quiet for a moment.  Then Nate said, “What I don’t understand is why God keeps us guessing.  Why doesn’t He just come talk to us, so we’ll know He’s there?”

“Good question. You’d think that would make it so much easier. Of course, some would say He did. Jesus was God, and He became one of us and said plenty.  Then He rose from the dead to show that He was who He said He was.”

“If God would just talk to us, we wouldn’t have to have the Bible or Jesus.  How come he doesn’t just come say, ‘Hey!  This is me here.'”

“All right.  That’s a fair question.  Maybe we could look at it this way: Who is your hero of history?”

“I vote Elvis Presley.  He changed the world of music,”  Bart added.

Nannygranne laughed. “Now you’re talking. Have any of you guys ever met any of those people?”

Nate frowned. “No, but that’s not the same.  We can see them on TV and hear them—all except George Washington, that is.  Millions of people have seen them.  There’s no doubt they are real.”

Nannygranne leaned forward. “We still have letters and papers written by people who saw and heard Jesus.  A bunch of them were murdered because they wouldn’t stop saying that they knew Him, saw Him die, and saw Him alive again.  Could that be the same?”

“I hadn’t thought of it that way,” Bart admitted.

But Nate was persistent about his point. “But still, why won’t God just talk to us?  He could do that.”

“Okay, Nate.  What if some pretty girl knocked on your door and said, ‘Come here, Nate.  I want you to be on my team, and you have to do whatever I want. Pack your stuff; you gotta go now.’  How would that strike you?”

Immediately the boys howled and said, “Go for it, man!  A pretty girl!”

But Nannygranne kept her eyes on Nate.  She obviously wanted an honest answer. “So what do you say, Nate.  How would that strike you?”

“Not good.  It should be my choice, not an order.  I don’t care who it is.” Nate’s response quieted his friends.

“Yeah, but there’s no relationship there.  She’d probably be crazy, anyway.”

“Good answer, Nate.  Then you understand why God doesn’t do you that way.  He wants a relationship with you.  He respects you enough to give you a choice.  He could force you.  But then your response would be meaningless.  Instead, He gives us beautiful things, shows us how to live well, sends us letters (The Bible), and even spent some time with us on earth.  That’s why He doesn’t just get in your face.  He wants you to want Him because of what He’s done and who He is.  It’s up to you to listen.”

The boys, now quiet, waited for Nate’s response.  Finally, he said, “I see your point. I see what you mean.  But I gotta think some more about this.”

Nannygranne, starting to get up, smiled, and said, “I think that’s pretty awesome, Nate.  You’re a thinker.  Some people don’t want to think.  They just don’t want God in their lives.  But I figure that if the God of the Bible is real, it won’t make much difference what I think when He knocks on my door and says, ‘You’re coming with Me.’”

Leon stood. “Thanks, Ms. Nannygranne.  Thanks for the cookies—and for taking the time to talk to us.”

“Guys!  Are you kidding?  I’m flattered to be invited.  I love it when people ask me questions.  Anytime, okay?”

As she walked away, she heard one of them say to another, “I wonder how she knows all that stuff about God’s letters.”