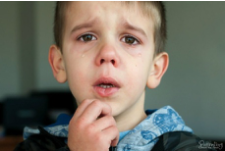 …Mommy won’t let me play with my friend Lance anymore,” he said, his voice quivering. Owen was such a kind and gentle boy.  I’d never seen him be less than polite to anyone. My “adopted” grandson ran to me for comfort.  I looked past him into the kitchen to see his mom shake her head in frustration.  Then she mouthed “Good luck” as I winked to assure her we were okay.

As I drew him close, I assured him that his mother loved him very much and that she loves Jesus, too.  But we would try to find a way to understand. “Did Mommy say why she didn’t want you and your friend to play together?”

“She said they weren’t very nice,” he said haltingly, still trying to talk between sobs.

“Do you think she meant your friend or his family?” I asked.

“I don’t know.” he moaned as he leaned into my arm, sobbing again.

“Did anyone at their house do something they shouldn’t have?”

Owen became very quiet, looking at his hands now,  not knowing what he should say.  I waited, letting him form his thoughts uninterrupted.  Finally, he said, “Sometimes his big brother is there, and he says bad words and yells at us.  And sometimes Gilbert says them, too.”

“Hmm,” I said thoughtfully.  “How does that make you feel when you hear them doing that?”

Again he grew quiet, swinging his leg nervously.  He suspected we were heading toward his mother’s point of view. “I don’t like it.  But they don’t do it all the time.”

“Did anything happen today that made it worse?”  I hoped he could make the connection.

“Me and Lance and Gilbert–Gilbert’s nine–were out in the back yard when Gilbert hit Lance and called him a bad name.  Then he told me not to play with him.”  Owen understood more than he really wanted to.

“I bet that hurt Lance’s feelings when Gilbert told you not to play with him when he’s your cousin,” I noted.

Owen looked up at me.  It seemed there was more.  His large brown eyes held mine as he continued.  “And one time Gilbert had his big brother’s knife.  He showed it to me and told me not to tell anyone.  I didn’t like that either, but I didn’t know what to do.”

“Oh, I see.  It sounds like being Gilbert’s friend can be a little hard.”

“Yeah,” he sighed.  “How can I know who’s nice, and why can’t I just be friends with everyone?”

“That really would be a nice world, wouldn’t it, buddy.”   Indeed it would be a lovely world.  But at the tender age of 6, Owen was encountering the truth about the world around him.  Not everyone is nice, and being friendly doesn’t always produce friends.  “You know, Owen, Jesus wishes everyone would be His friend, too, just like you’re feeling right now.  But some people don’t like Jesus or the way He acts.  So Jesus knows just how you feel.”

“What does Jesus do when someone doesn’t want to be His friend?”  Owen couldn’t imagine anyone not wanting to be Jesus’ friend.

“He lets people make their own choices.  He doesn’t worry about not being good enough for them.  But He is sad  because He is the only one who can ever be our real best friend forever, and those people will miss out.”

“But I don’t want to miss out on being Gilbert’s friend.”  His situation still stung.  Having older friends can be a challenge for a young boy.

“Jesus does tell us to love everyone as God does.  But that God-love means to be kind to everyone and always do the right thing for them.  It doesn’t mean we have to be friends with everyone, just be kind to everyone.   There were some people who Jesus treated with respect who were NOT His friends.  He stayed away from those people and even told the disciples to watch out for them  because they were dangerous.”

“Who were they?” Owen asked.

“Well, some of them were important people in the town and their soldiers.  And there was one man who pretended to be His friend but got Him in trouble instead.  His name was Judas.”

“And one time, Peter tried to talk Jesus out of doing what the Father in Heaven told Jesus to do.  And Jesus told Peter to stop talking that way. Jesus wasn’t afraid to say ‘No’ when a friend wanted Him to do something wrong.”

“Are you afraid of Gilbert, Owen?”

“A little bit.  Just when he gets mad,” he said hesitantly, embarrassed to admit fear.

“You know, Owen, I think maybe that Gilbert is someone you should be kind to, but play with other friends.  Maybe Gilbert will see you being like Jesus and decide to be a better friend.  But ask God to give you good friends, and then watch and wait to see who you meet.  Besides, you still have Lance, and I bet he’ll be so glad you can play together again.  Good friends never ask you to do any wrong things.”

Owen nodded his head. He remembered something from Bible class. “Yeah. Good friends help you be good, not bad.”  He smiled at me.  “Nannygranne, do you want me to get you a cookie?”

As I said, Owen is such a sweet boy.  I prayed God would grant him wisdom, and to learn to love with God-love.  Then I prayed that God would protect his gentle spirit and strengthen his soul.