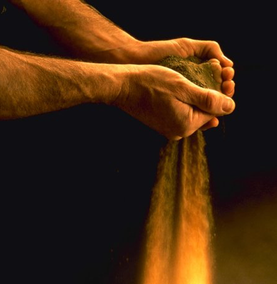 The class lesson had been about God creating Adam when Caleb raised his hand and asked, “How did God take a pinch of dirt and make a man?”

“What a good question!” Nannygranne responded.  “Wouldn’t it be fun to be able to watch God do that?” she said.

The other children around the table nodded vigorously.   “I can make Adam out of playdough!” Janie offered.

“Not a REAL one!” Felicity argued.

“But wouldn’t it have been fun to see God make that first man!”  Nannygranne wanted to turn the attention back to the point.  “He only made the first human out of dirt.  Everyone since then is made from pieces of their parents.   Since we weren’t there that first time, we didn’t get to see how God took that bit of dirt and made Adam.  All God told us in the Bible is that He made Adam out of dust and Eve out of Adam’s rib.”1

“My Nana said Mama took the sparkle in Daddy’s eye and put it in her heart, and that’s where I came from,”  Lillian announced.

“Lillian, what a nice thing for your Nana to say!”

Leaning forward, Nannygranne whispered,  “Friends, did you know that scientists know our bodies are made of over 60 different things and all of those things are in the dirt of the earth?2″

“We must be,” the teacher continued.  “Another thing God tells us in the  Bible is that when Jesus comes for us on the last day, that He will make us all over again!”

“WHAT???” the class came to life, all talking at once.

“He’s going to make us again?”

“Is he going to use dirt again?”

“If he makes me out of Lava dirt, can I be black?”

“If I get red dirt will I be an Indian next time?”

“Is there white dirt somewhere?”

Laughing, Nannygranne calmed the group, “This time He won’t use dirt.  He’ll use His REAL superpower that only God has.”  Now they were silent, holding their breath at the idea of superpowers.  “When Jesus comes back, He will change everybody who has died into a different kind of body and make them alive again.  Bodies will come out of their graves, or the ocean, including those who died so long ago that they turned back into dirt.  And Jesus will remake them into super bodies that can exist in His other world.  We call His world Heaven.  And we won’t know how He’s going to do that, either.  But it’ll be awesome!”3

Caleb got up then and came closer to Nannygranne, concern on his freckled face, “Will everyone get to go with Jesus?”

“Caleb, everyone who Jesus knows and who wants to be together with Jesus can go. That’s why we learn all about God and how to be like Jesus.  He shows us how we can live God’s best way now and be ready to live in His world later.”

“Then, can we watch what God does?”

2Wikipedia, Composition of the human body