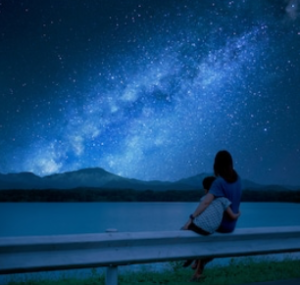 The night sky appeared almost magical.  The moon, yet to rise, allowed the stars to dazzle against the blackness of space.  Magical moments happen when you’re camping with your kids.

As we sat on the parking lot guardrail by the lake, we talked about God knowing just how many stars He’d made, and even knowing their names. Psalm 147 says God “counts the number of the stars.  He calls them all by their names.”

Suddenly, we each grew quiet, lost in thought.  I wondered what my son was thinking.  He was born with a vivid imagination and a sometimes maddening curiosity.  Then he asked, “Who made God?”

“That’s a really big question.  Who do you think made God?”  I wanted to know if he’d given much thought to his question.

“I don’t know.” he shrugged.  “Everything starts somewhere.  Chickens lay eggs that hatch and make chickens.  Water comes from rain and then evaporates and turns back into clouds. Rocks even used to be dirt or lava. So where did God come from?” Yep.  He’d been thinking about it for a while.

“OK, how many chickens have hatched since the first chicken laid the first egg, do you think?”

He looked at me, grinning, and then slapped his forehead.  “That’s crazy!  Bazillions!”

“But there had to be the first chicken at some point, right?”

“That’s right! The fact is that God made every piece of everything in the whole universe.  And God made space,” I waved over the sky above us, “And God even made time!”

“I hadn’t thought of that.”

“Time measures what is happening in the world.  Everything in the world has a beginning and an end.  Does that make sense to you?”  I waited while he pondered and then slowly nodded his head.

“Yes.  God made time, space, and we call everything we see ‘matter.’  Have you heard of matter at school?”

“Yes.  Everything we can see or touch is called matter. That’s what my teacher said, except some matter is so tiny we can’t really see it.”  He explained, pleased with his eight-year-old academic prowess.

I wanted him to understand the vital truth about who God is, so I tried an example.   “If I bake a cake, am I part of the cake or am I different from the cake?”

He looked at me puzzled by the sudden change of subject.  “What?”

“You heard me.  I want to explain something to you.” Repeating, I said, “If I were to bake a cake, would I become part of the cake?”

“Well, no.” He wasn’t convinced that this made sense.

“Then if God made time, space, and matter, He isn’t part of them, either.  He is separate from what He made.  Now does THAT make sense?”

His eyes grew wide and, speechlessly, he nodded that he understood.

“And He created everything we can see or touch–matter–but God is invisible because He is not  matter.” I waited for his reaction.

” And God also made space, but He doesn’t live in that space.  He can be everywhere all at once.”

Now his eyes bore into mine as he waited, poised for another surprise.

“And God made time, but in His world, there is no time.  That’s why He has always existed and always will.”

“So you see, God is the only One who could make the world because He didn’t have to be made by anyone.  He has always been there and will always be there.  Just think!  One day we’ll get to be where He is, right there with Him.  Then we’ll get to watch what He does next.”

We both returned our gaze to the sky, both of us filled with wonder.  I thanked the God of that beautiful universe for my son’s curiosity and imagination;  gifts that would enhance his faith as he discovered the ceaseless wonders of God’s creation.