It was a perfect October Saturday.  The sun was bright, the air cool and color painted the borders of our road trip to the Pumpkin Patch.  We were having a Granne and Wonderbundle Road Trip!

The music on the radio was upbeat and we were enjoying our M&M’s and Pucker Power sticks when something made her ask, “Granne, how do we know the Bible is true?”  Had her mother asked me that, I wouldn’t have had the wisdom to be so excited.  This was a powerful moment between us.  I was so thankful I could answer her question.  My problem wasn’t finding an answer, but picking one that she had the patience and the back story to hear.  There was sugar in the mix after all.

“You were telling me that one of your on-line classes is called ‘Plato’ right?”

“Do you know who Plato was?”

“He was a school teacher who lived about 400 years before Jesus was born.  He may have even met Jeremiah the prophet in Egypt before he died.  You’ll hear a lot about Plato and Aristotle, Socrates and others, who taught and wrote and really got people to thinking about important things.”

Looking out the window she said, “Did he write part of the Bible?”

“No, but he may have heard some of the old testament books read.  He read a lot.”

“Is this where you tell me if the Bible is true?”  She’s quick minded.

“Yes, because I wanted to tell you how important Plato’s teachings are and that nobody wonders if Plato really lived or if he really taught and wrote.  We have copies of what he taught.  We don’t have the papers he wrote on, but people made copies and copied those copies and copied those copies…for hundreds of years!  Do you think anyone might have made a mistake when they copied any of the copies?”

“Probably….” she looked at me for my reaction. “Probably not?”

“It’s something to think about.  We hope not…but we only have 7 copies and they were made over 900 years after he wrote them!”

“Yes, almost a thousand years and many, many copies…only 7 left.”

I let that sink in until she turned away from her treat and looked at me as if to say, “And?….”

“Jesus didn’t write things down himself, but some of the disciples and others who knew him did write down what he did and said. And lots of people made copies.

She looked down the road, lost in thought.

“And guess how many copies we still have?”

“And guess how long it was before one of the books was copied after it was written?”

“That copy was made about 40 years after it was written.  It’s part of the book of John.”

I glanced over to see if she grasped the significance of that statistic.  Not sure, I continued.  “There are people who like to say that the stories were made up about Jesus. They say that Jesus did live, but that he just became a legend, like Robin Hood.”

‘Well, some people say that things written about Jesus were just made up.  But there’s a problem with that idea.”  Now she was curious.  “If somebody made a story about something that happened, and there were people who saw what really happened, what would they do?”

“They’d tell everyone that that person was lying!”

“Exactly.  Especially if they didn’t like that person to start with.   And you remember that there were a lot of people who didn’t like Jesus or his apostles.  They even killed Jesus, remember?”  She nodded solemnly.

“Well, the apostles wrote some of their stories just 15-20 years after they happened.  There were a lot of people still alive who had been there and they would have known if the stories weren’t true, right?”

We were approaching the next town and the blazing hillside gave way to home places and hay fields.  I continued.

“Isn’t it weird that nobody ever wonders if Plato lived, but then some say they don’t think Jesus lived when we have much more proof of Jesus and his teachings.  Do you think that makes sense?”

“The Bible is real, sweet girl.  It’s supernatural.  And we can trust that when we read it, we’re reading just what the apostles who knew him wrote.”  I had one other thing I thought she might like.  “And did you know that people buy 175,000 Bibles every day just in the United States?”

“Really?  Wow.” After a thoughtful silence she murmured the proverbial wisdom from the mouth of babes:  “I wish they all read them.” 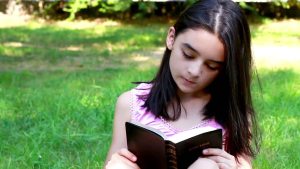